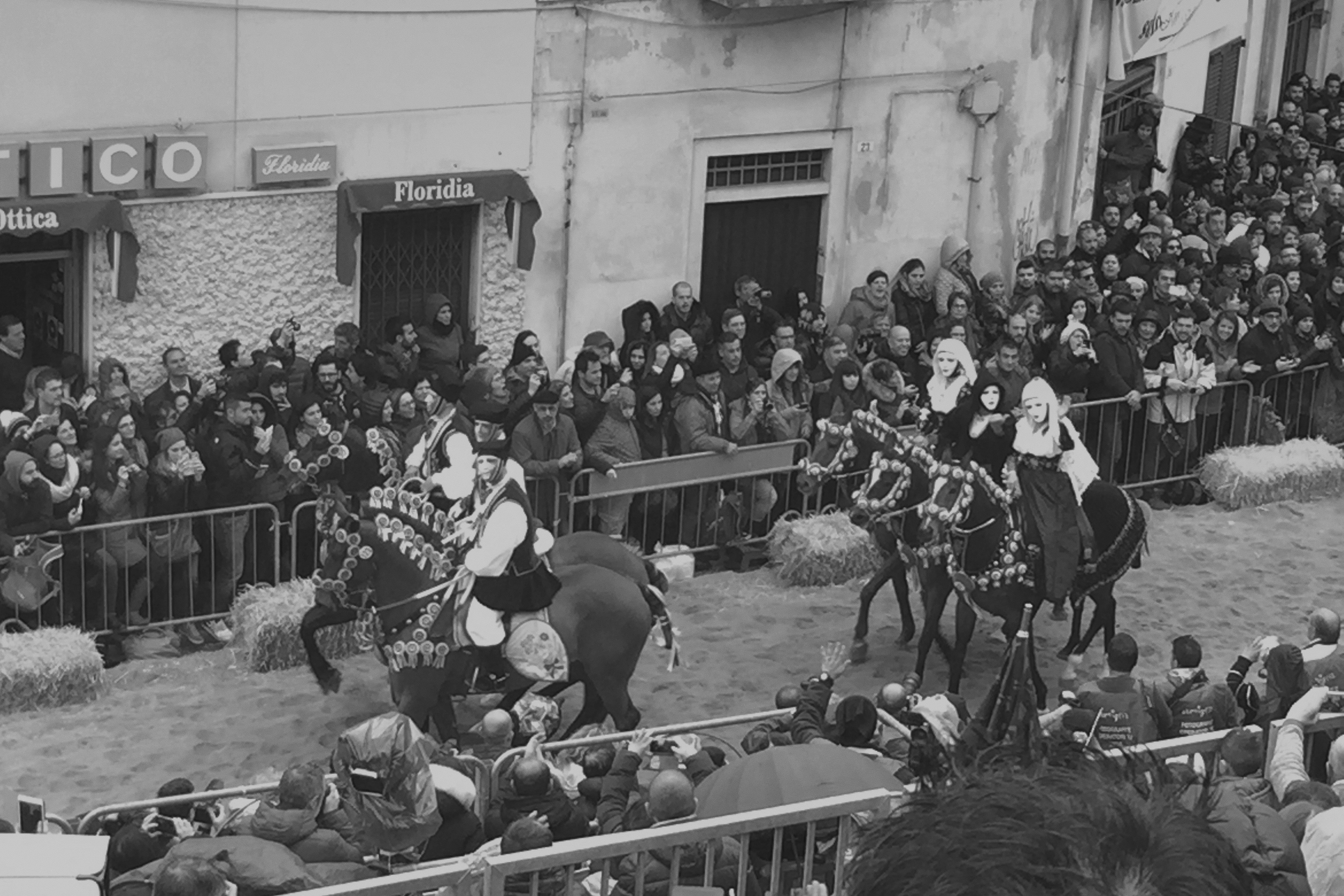 One more year, the city of Oristano is preparing for its most prominent party, Sa Sartiglia. This year 2020 is celebrated on February 23 and 25.

10 am – The Notice Announcement
Early in the morning, the group of drummers and buglers starting from the Eleonora d’Arborea square, in front of the City Hall, escort a herald on horseback through the streets of the historic center, reading the notice of Sartiglia, inviting the people to attend the tournament.

11:00 am – Special postmark
Post Office opening with Special cancellation Post in the office of the Fondazione Sa Sartiglia . A one-stop philatelic extraordinary, by the Italian Post Office, cancel all correspondence with the special cancel figured prepared to celebrate the Sartiglia. In addition there will be a Folder that will contain philatelic postcards stamped and canceled and the data of the Sartiglia.

– Sunday  dressing of “su Componidori” in the venue of  Farmers’ Guild

– Tuesday dressing of “su Componidori” in the venue of Carpenters’ Guild

In the morning of the tournament day, ‘Su Componidori’ (the Head of the joust) first goes to the stables to greet friends and riding mates; then he pays a visit to the Chairman of the Guild. At about 11 am a parade leaves the President’s house and leads the precession to the hall where the Dressing ceremony takes place. Drummers and trumpeters open the procession, formed by ‘Is Massaieddas’, who carry the clothes of the Componidori on their flat baskets (Is Corbulas), accompanied by ‘Sa Massaia Manna’, a woman designed to supervise the dressing ritual; then, the Guild members follow, carrying the swords and a wooden sword stick to be used for the race and, finally, ‘Su Componidori’.

To finish the dressing, from the stage, ‘Su Componidori’ mounts on horseback. Just then, the Chairman of the Guild hands him ‘Sa Pippia ‘e Maiu’, a double bunch of periwinkles and violets symbolizing the coming-up spring. After giving blessing to the crowd, greeting the Chairman, the members of the Guild and all the people present, the ‘Componidori’ reaches the exit and leaves the hall leaning backwards over his horse’s back. The dressing can be accessed through formal invitation organized by the Guilds. It will be broadcast live on the big screen in piazza Eleanora.

01.15 pm – The Parade
At the end of the dressing ceremony of ‘Su Componidori’, the parade of horsemen, led by the head of the joust, preceded by buglers and drummers and the Guild organizing the tournament of the day, proceed towards the street of the Cathedral of Santa Maria Assunta, where the start joust begins.

01:30 pm – The Star Joust
A three-fold crossing of swords between ‘Su Componidori’ and his second-in-command, marks the start of the joust.The challenge begins. ‘Su Componidori’, will charge the star and attempt to capture it upon his sword. Next his two aides-de-camp will try. Only those riders honored by the assignment of a sword by the head of the joust will be entitled to attempt the capture of the star. After them the head of the joust and his mates tempt their luck with the wooden lance (“stocco”). Once the rides with the wooden spear have gone, ‘Su Componidori’ returns once again in front of the Cathedral square, to hand back the wooden lance for a scepter of violets for greets and to bless the Guild and all the people present.
Once more, it is time for them to form a parade and move back towards via Duomo, corso Umberto, piazza Roma and, finally, via Mazzini, the setting where the ‘pariglie’ will take place.

04:30 pm – The race of Pariglie
Su Brocciu, the small tunnel leading to via Mazzini, marks the beginning of the audacious equestrian acrobatics. The series of performances opens and closes with the group of Su Componidori.

At the end of the race of Pariglie, the cortege forms again to return along the track of via Mazzini.
Now, at dusk, the parade of horses and riders seems to foretell the end of the race.
At the end of the parade, the cortege of buglers, drummers, Guild members and horsemen heads for the seat of the Guild, where the dressing of ‘su Componidori’ took place in the morning for the undressing ceremony. Once the top hat and the veil are removed, an extraordinary roll of drums marks the moment when the mask is taken off his face: now ‘su Componidori’ has turned into a rider again. At last, the Guild, the horsemen, everybody can approach him to greet him with congratulations.
For the undressing the admission is free.