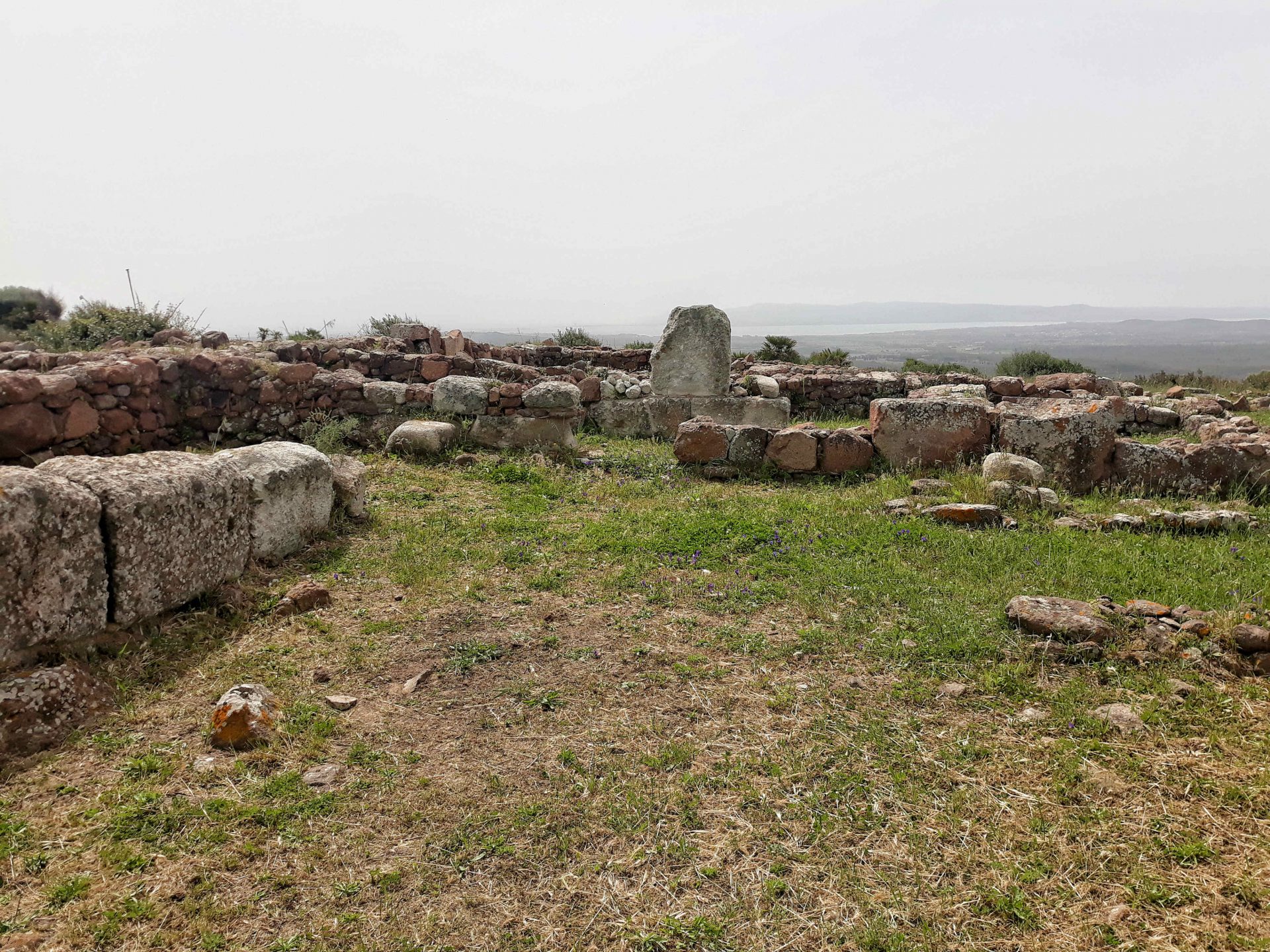 If you visit the Sulcis in Iglesias area, you will find yourself in one of the oldest areas of Sardinia, on the land where the first Nuragic, Phoenician and Punic civilizations settled.

Mount Sirai is a true open-air archaeological museum. It was inhabited by the Nuraghic people from the first half of the second millennium BC, from the Neolithic era. In 750 a.C., the Phoenicians of ancient Lebanon, who were already living in Sulki, the current Sant’Antioco, settled in the territory of Mount Sirai and lived in their village. When the Phoenicians arrived, they probably found a nuraghe 14 meters high that connected all the nuraghi in the area.

The Phoenicians used it as a sacred area and around it they built the village and the tombs.
The town was used as a civil settlement and not a military one. It extended to more than 2 hectares of land and this aspect allows us to understand the importance that the town assumed over the years from a logistic point of view.

200 years after the arrival of the Phoenicians, the Carthaginian troops, also called Punic, arrived from North Africa. The Punic belonged to a colony of Phoenicians who colonized Carthage, the current Tunisia.

With the arrival of the Punic, most of the funerary customs changed. Since the cremation or cremation used by the Phoenicians, the dead were buried.

Twelve graves have been found. The one we went to visit is the most important and the largest. It is the only one that has a central pillar and, this element, suggests that it belonged to an important family of the Punic community.
Another very important element that gives this tomb a certain corporate importance is the symbol carved and found in the entrance, which represents a typical Carthaginian deity, Tanit, goddess of fertility, protector of Carthage, associated with Dido. Even more particular is the fact that the symbol of the goddess Tanit has been found upside down. It is the only example in which the goddess is represented in this way and archaeologists can not explain the reason.
Due to its peculiarity, the overturned symbol of Tanit has become the symbol of Mount Sirai.

Returning to the description of the tomb, along with the bones of the dead, were objects and amulets that belonged to the funeral tomb of the deceased and had the function of accompanying him during his eternal journey. The bodies were placed in the sarcophagi and then covered with wooden boards. All members of the family were buried laterally, then when the space on the sides was not enough, the other family members were buried in the center of the room in wooden sarcophagi.

Advancing, near a small hill, is Tophet.

The Tophet was a necropolis of children. It is located in an area separate from the other burial areas because the children who were buried were children who died almost immediately after birth or even were born dead. It was said that they were those who had not yet “entered society”, who had not had, therefore, time to enter society and be recognized civilly.
350 urns were found in this particular archaeological area, along with 150 small monuments called stelae that had the function of ex voto, that is, of the gratitude that men made to the gods for the graces received. So the Tofet assumes the burial place of the children, but it is also recognized as a sacred place where celebrations of thanksgiving to the gods were celebrated. In this sense, we recommend you visit the nearby Sant’Antioco. Even there, in addition to a beautiful archaeological museum, you can visit another very large Tofet that contains bottles of small urns, and many votive stelae that always had to do with fertility.

When you leave the sacred area of the burial sites, if you walk for a while you will reach the village.

The entrance to the town is characterized by a fairly narrow entrance, a square, a temple, three parallel streets and a series of terraced houses. The base of the houses in the town was rhyolite, that is, red traquita. The bricks were of clay and straw dried in the sun, what the Sardinians call “su ladiri” or “su ladri”.

The temple, of which only the base remains, is of trachyte or tufa. In addition to the red traquita, there is also white and yellow traquita. The rest of the temple was made of clay and straw bricks, and everything was plastered.

In one of the corridors of the temple was found a statue of the goddess Astarde, a Phoenician female deity whose original statue is preserved in the museum of Cagliari.

In addition to Astarde, there is also that of the god Bes, whose image was found in the form of a bone plate (probably a wooden furniture decoration.) The god Bes was an Egyptian deity to whom the Phoenicians continued to worship and protect the children The original statue of Bes was found in the archaeological site located near the city of Chia, the ancient Bitia, and even today it is kept in the museum of Cagliari.

The Punic people reorganized the village in the 3rd century BC.
We visited two houses: one excavated in the 1960s called Casa Fanthar in honor of one of the two Tunisian archaeologists who followed the excavations; and the other that was excavated in the nineties.

The curious feature of the Fanthar house is that it is represented by its interior patio, built around it, very similar to “sa lolla”, the typical interior courtyard of the houses of Campidanese (Sardinia). In addition, from the distribution of the rooms, it is assumed that in this house there could have been a higher floor.

The other two-story house was built in stone and wood. First of all we can see a channel for the water that was used in the home; the one that ends in the external part, on the other hand, was used to be collected in a tank.

An oven has been found inside the house, of which there is a copy on the outside. The oven was used for domestic use and for baking bread.

In another part of the house, deer antlers, iron scoria and stones were used to sharpen the blades. From the findings, it was thought that the house had belonged to a craftsman who produced knives.

Besides the interest in archeology that you may or may not like, I recommend visiting Mount Sirai: the landscape, characterized by the gentle hills, is very beautiful and relaxing; the open and very large spaces allow us to understand why it was chosen by the diverse populations described. Another aspect that caught my attention was knowing that the civilizations that settled one after the other did not make war, but coexisted peacefully for long periods. Nobody can know exactly how things went, but from small archaeological findings and historical testimonies, you have to think that this really happened and the curiosity to know the details of how they lived and handled everyday life, is already a lot! ?

Comment of the local: to get to Mount Sirai the road is signposted. From the main road that goes from Carbonia to Sant’Antioco, at a certain point you should turn right. The traffic signal where you should turn is not very visible, so I advise you to be careful not to pass it on.

If you have time to go further, or you have some extra days to devote to this area, we suggest you visit the archaeological museum of Sant’Antioco and visit the Chiara Vigo workshop, the Maesso del Bisso that we already presented. You can read about it in one of our articles that we remind you in this link: CHIARA VIGO, THE MASTER OF THE HILO DEL MAR – SANT’ANTIOCO

If you decide to visit during the summer, we always recommend bringing water and a hat to protect yourself from the sun. There are no areas of shade, but it is very hot. In addition, you can do the guided tour, the guides are very prepared.