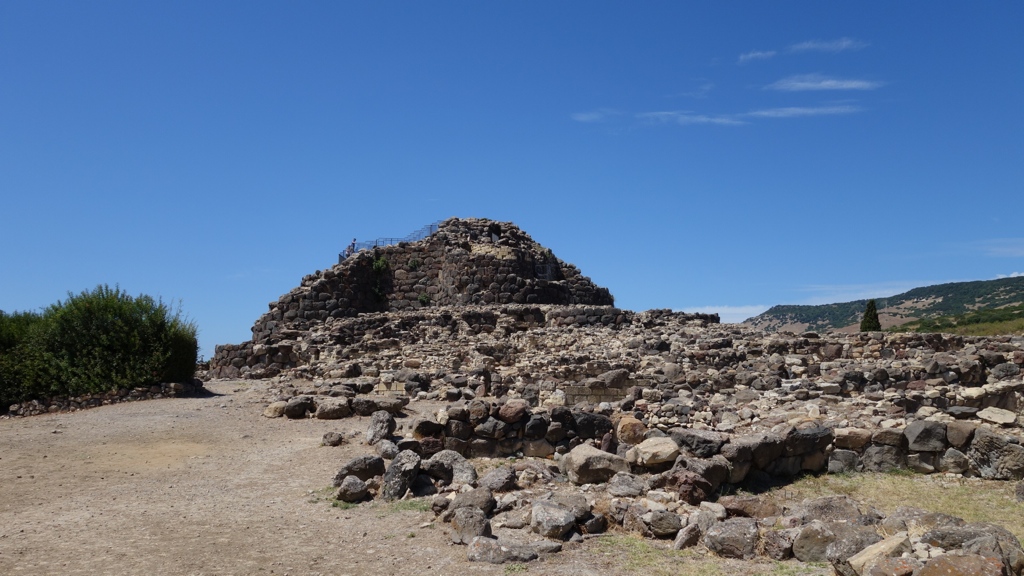 The nuraghi are the most characteristic and the most mysterious of ancient buildings of Sardinia. is not yet known exactly use that ancient Nuragic populations of these wonderful fortifications made of stone. What is certain is that the part we can visita now of these huge castles, are not the last. All others remain underground. A lot of them priceless, waiting to be discovered.

The historical period is from the Bronze Age to the end of the second millennium. The hypothesis on nuraghes refers to military use. It is possible that at that time, people and civilization developed around military fortifications. So, around the remains of the fortifications, where entire villages are most likely he took place everyday life, without being part of military activities. 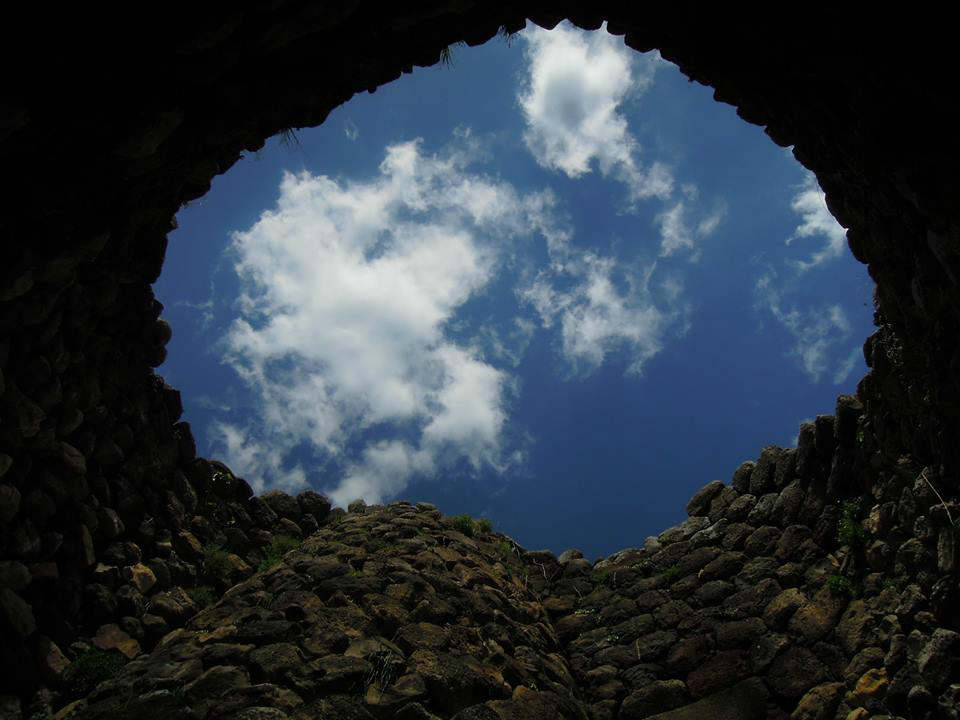 In Sardinia found more than 7000 nuraghi. There are several different types and importance. The diversity of nuraghes depends on the number of towers that has the building. There is usually a central tower and another surrounding the principal. The number of towers varies from one to five. The nuraghe Arrubiu for example, located in Orroli, a town in the interior of the island, is the only one found so far that has more than five towers in addition to the plant. The Arrubiu nuraghe is a pentagon (five towers). The name comes from the sardinian arrubiu and means red. The red color is due to the soles of the lichen growing on the dolmen and give it this color. 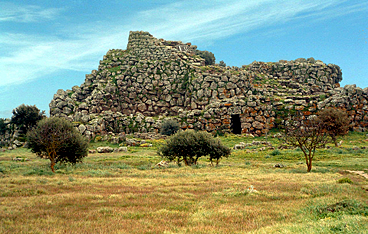 Research conducted recently in Arrubiu nuraghe did an amazing discovery, has found a true laboratory of bread from 33 centuries ago, and found almost intact. Along with oven and hob, they found utensils and containers, grinders and remains of unleavened dough. (This means the feeding of the Sardinians in antiquity was already very healthy !!!!) 😉

Research continues, but very slowly unfortunately. Funding to conduct archaeological excavations are not always available and many of us are unaware of the enormous wealth we have in the ground, which can not devote the attention it deserves. An eloquent example can do is the giants of Prama mountains before being brought to light, they were at the mercy of grave robbers for forty years after its discovery.

It has certainly not had the same luck the Nuraghe Barumini: Su Nuraxi.

When we speak about Barumini, we can not fail to refer to its discoverer, the archaeologist Giovanni Lilliu. Thanks to his work, between 1950 and 1957, bringing to light an entire nuraghe village. Su Nuraxi has 4 towers. It was assumed that the village dates to the late Bronze Age, and the oldest part, which consists of the central tower and three overlapping rooms, belongs to the period between the thirteenth and seventeenth centuries B.C.
Since 1997, Su Nuraxi has become a World Heritage Site by UNESCO. 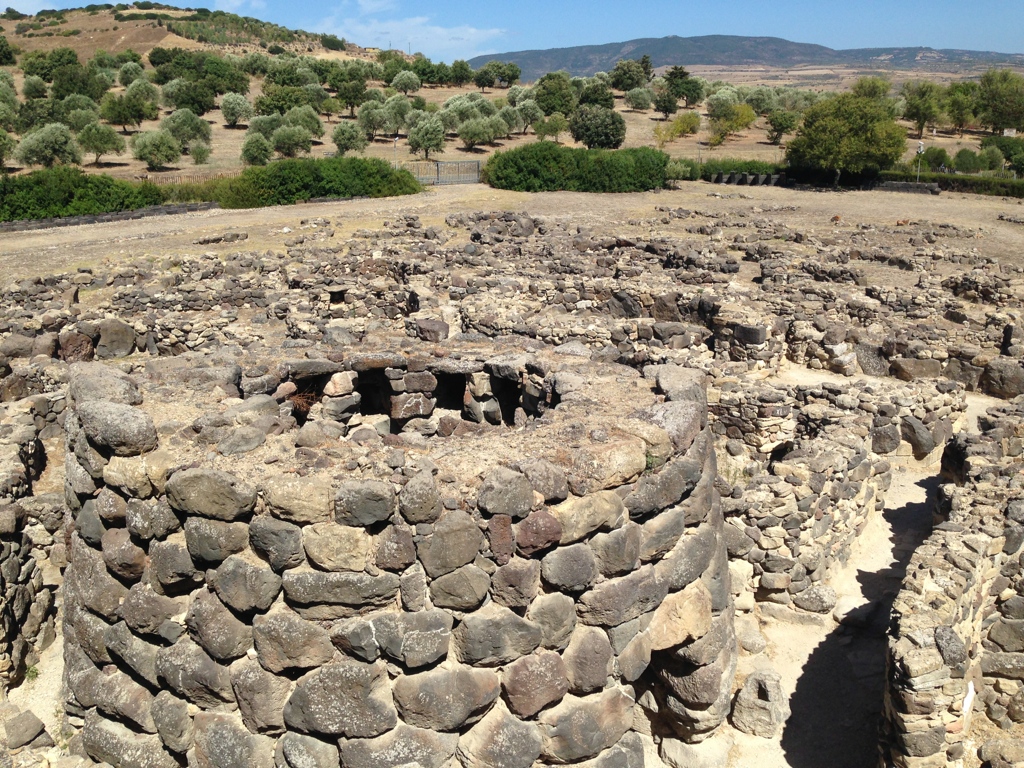 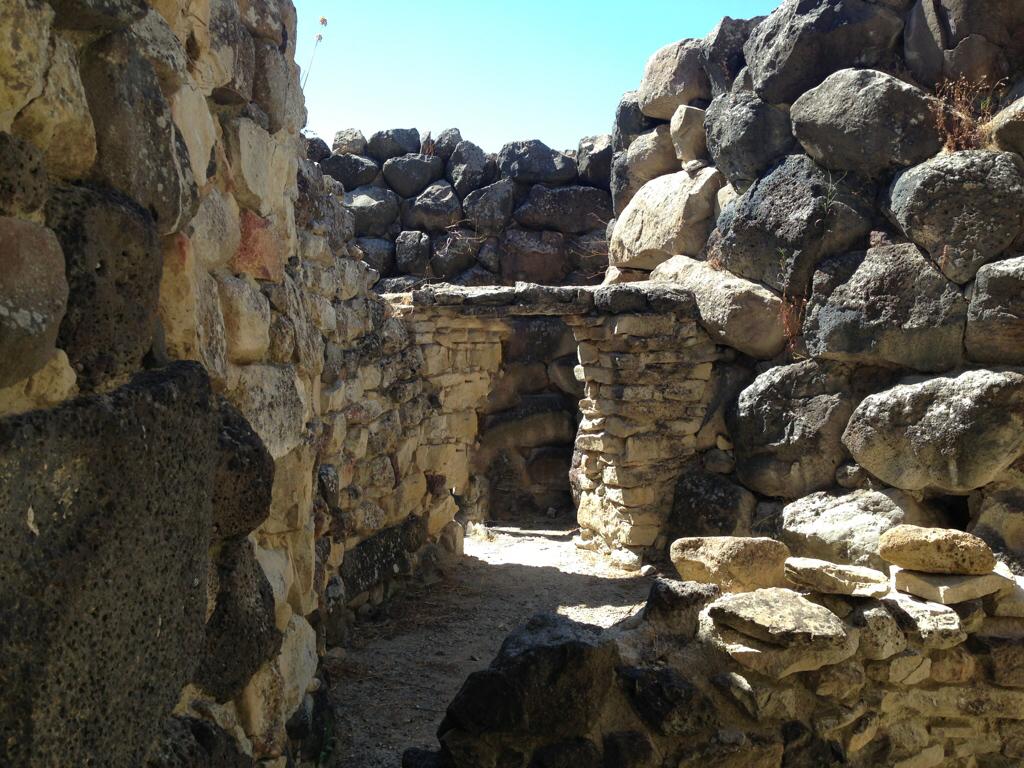 It can be reached from Cagliari after about 60 kilometers and is located between Giara di Gesturi and the village of Las Plassas, where you can visit another interesting giudicale castle which dominates the area from above.
The charm of Barumini you have to live it. The place is described only through the telling of its story and the photo does not do enough.

In addition, the guides are well prepared and really will help you to understand how was organized the life during that time. 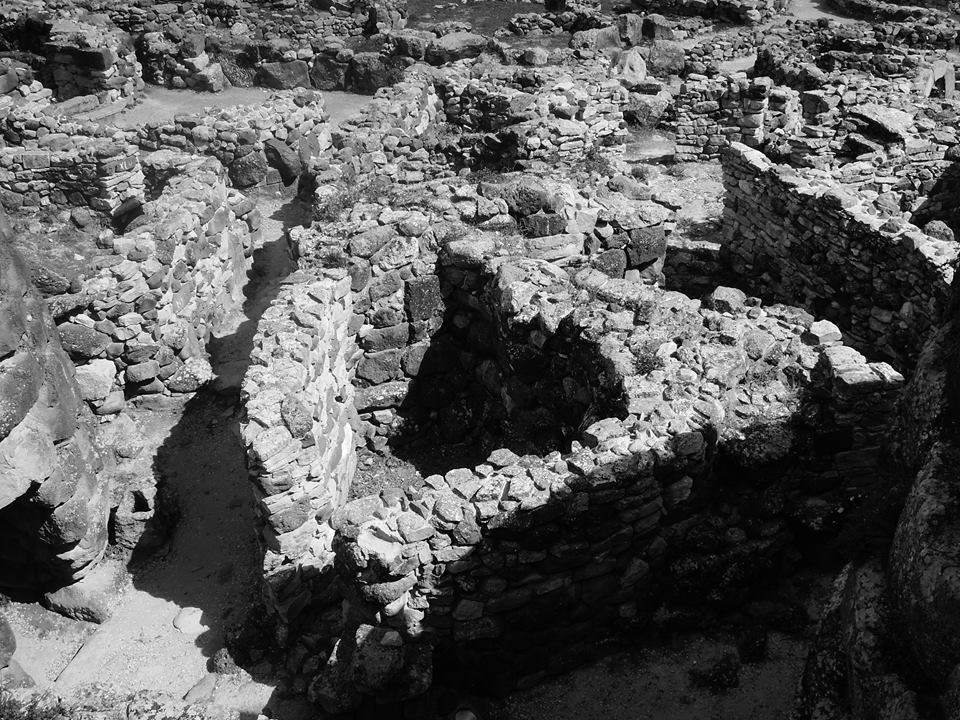 Even from an architectural point of view, the design of the nuraghi is very complex and cutting edge. The arrangement of the stones mounted on each other and are not bound by any material, suggests the ingenuity of its builders and, in my opinion, have nothing to envy to the pyramids of the ancient Egyptians.

What Giovanni Lilliu did for us and Sardinia it is something great, but unfortunately a drop in the ocean if we think for a moment the myriad of wealth we possess and that remains hidden. I also think in the area of Teti, a central village of Sardinia, where one of the most impressive nuragic sanctuaries in Sardinia: Abini. In Abini he found even amber, which bears witness to its presence at that time in the great world trade, including areas of Russia, where the amber was very present. In Abini the nuraghi statue of warrior god  of four eyes met, perhaps the most famous nuraghi bronze statue is often found in history books.

The Nuragic statues are bronze: bronze is an alloy of tin and copper. Unlike many other materials, this metal is more malleable and soft, at that time allowed to build more effective weapons. Tin is not an existing material in Sardinia, but the presence of neuralgic votive bronze  especially, is very strong. To do this, it was assumed that the Nuragic were the ancient peoples of the sea called Shardana from the land of Mesopotamia, who settled in Sardinia and continued trade routes with the rest of the world, using as a central location and gathering lands our island. If so, I wonder why it is not deeper study of these populations. For some strange reason, all the history books begin with the description of the Egyptians, Mycenaean towns and little nuraghi study population deepens. However, people of Shardana, besides being the oldest, with the Egyptians had much to do in fact, for their attempts to conquer the Mediterranean by the people of the sea. Achievements that were not achieved, but the influence of  Shardana people in the Egyptian warriors, was such that there are representations of the figures, which appear as stone statues, even in the beautiful temple of Abu Simbel.

In 1200 B.C. a strong earthquake affected all areas of the Mediterranean generating a huge tsunami that submerged Sardinia much of the southern areas of the island and forced the population to abandon the land sea.
Sardinia became a marshy extension and nuraghi near the coast were completely destroyed.
It was this extraordinary natural event that led some researchers to speculate that the famous mythical city of Atlantis, described by Plato, was precisely in Sardinia.
It is a likely scenario if we consider all matches found. I realize, however, that, with all that I would like, it is not easy to think about what really happened.

However, even between mythology and reality, Sardinia continually reveals itself as a land full of mysteries and always different, always original. It is a treasure trove, which is believed to still has much to teach us, a treasure that could also distort the history of ancient civilizations. What I hope is that soon Sardinia live a phase of global interest that will allow eventually be discovered and appreciated. I think he deserves it and saying this, I will not be presumptuous. 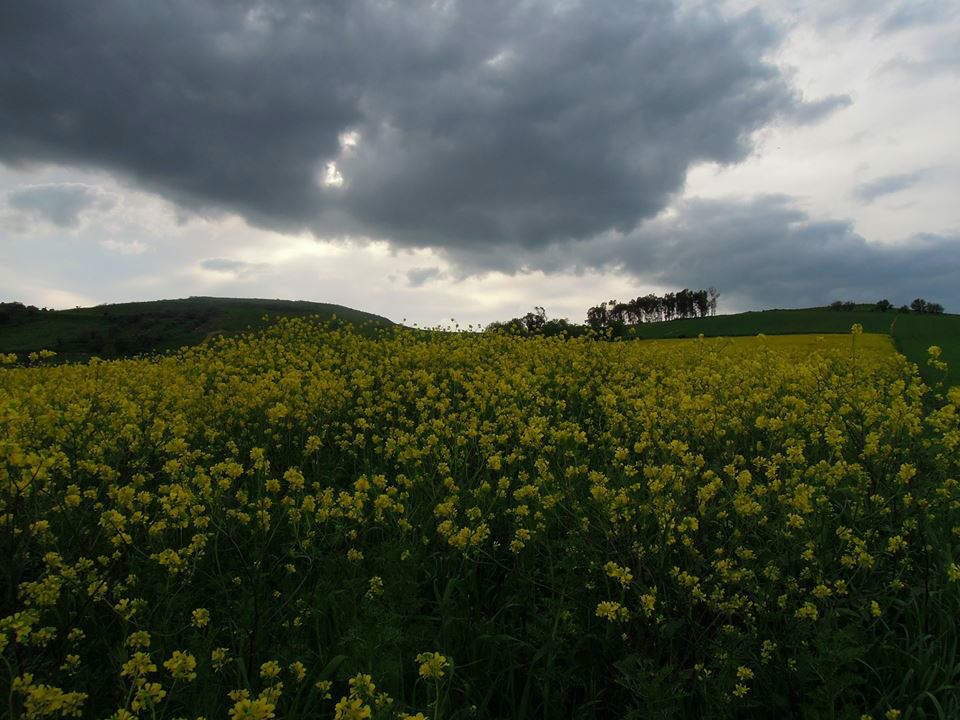 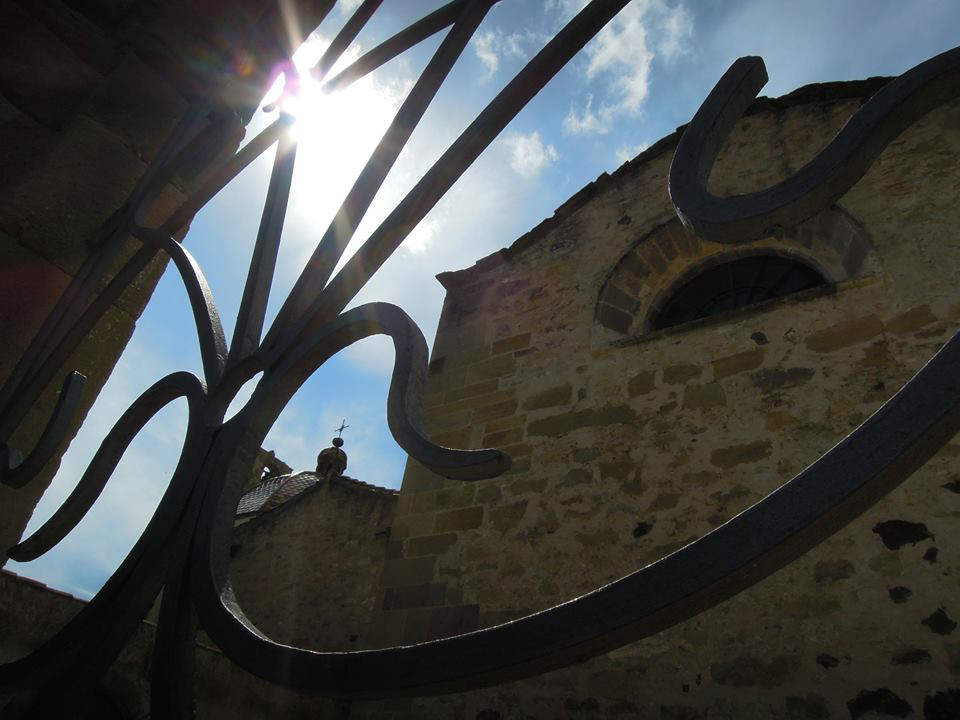 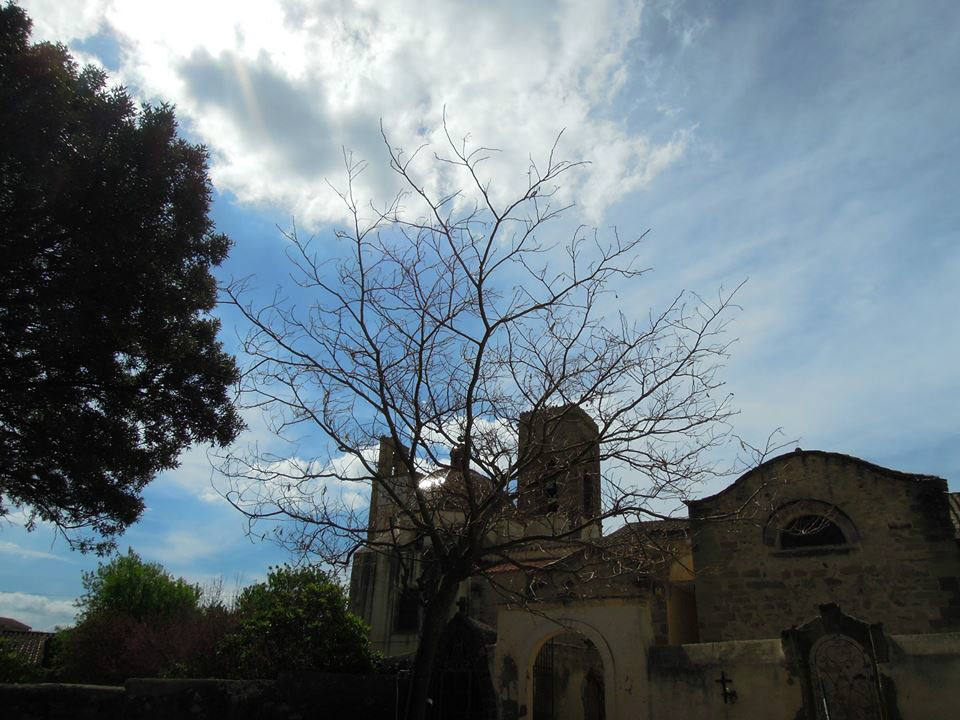 Comment of the tourist: If you can, go with comfortable shoes and avoid slippers. There you will discover why ;-). In Barumini you have a visit every hour (since the visit is guided, we can not go on our own). You can go without reservation and were placed in the first group to be available. Visiting hours are from 9h to 17h in autumn and winter and 9am to 19pm in the spring and summer and the price is 8 euros per person.

If you have to wait too long, you can take the opportunity to go visit near Casa Zapata Museum, opened in 2006 and located in a seventeenth century palace that belonged to the noble Spanish family Zapata, former barons of the area and administered it to the end of the feudal era. We recommend this visit since little can be done in Barumini itself to wait, especially if it is hot. There is only the small shop-office ticket sales, and across the road a rather seedy bar. See if riding a cafe in conditions … the place it deserves.

After your visit, we can leverage to eat something quick in the village and make an afternoon view herds of wild horses of the Giara of Gesturi.

Comment of the local: During one of my visits to Brumini, waiting to enter the nuraghe, I stopped in a very good local bakery that recommend you visit. It is located opposite the house of Zapata and is very easy to find. I remember I attended a lovely girl, and I was very excited because, after so many years, I found a sweet dough had not eaten since childhood. It is a covered donut with whipped cream and strawberries in season. After saying goodbye to the girl, after a while I went to the start of the tour, and when I got to the meeting point, the guide greeted me “. Hello, we are again” I looked up and found myself facing the same girl from the bakery !. She explained that in the morning he helped his aunt  pastry and worked in the afternoon in the nuraghe as a guide.

About Zapata’s house, I wanted to add that very special way inside: the soil is practically nonexistent and walk along walkways that allow look closely at the ruins of pre-existing nuraghi.
I think Giovanni Lilliu had an important idea, but for financial reasons I could not continue his research forward.

If you want to dig a little deeper on this information, you can visit the link Barumini Museum Foundation. It is a website with all the information about what you need to know about Barumini. www.fondazionebarumini.it

Good visit to all !!