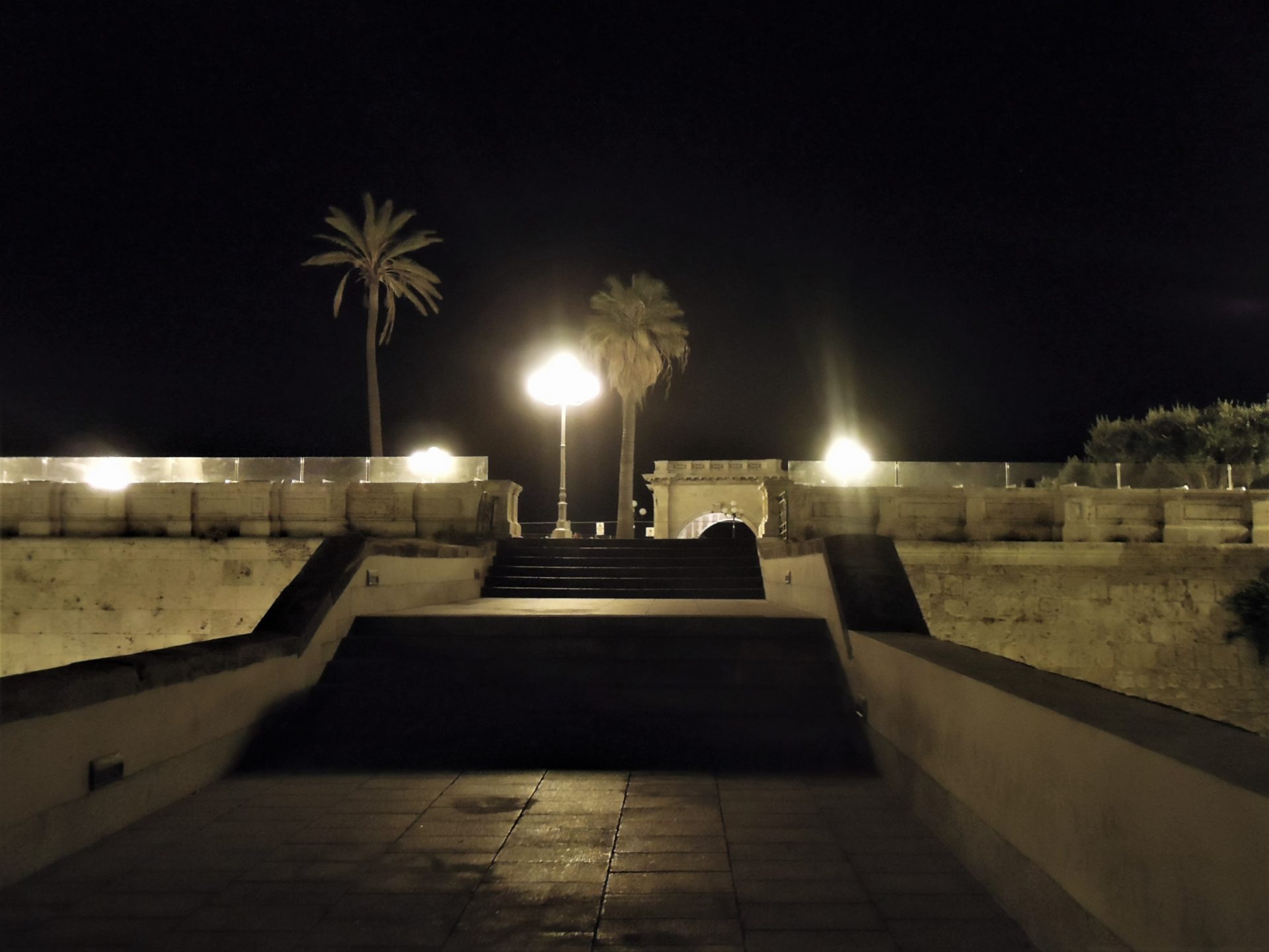 Cagliari, my city, which I thought I knew so well, the other night gave me another nice emotion, I went on an afternoon tour through the streets of the Castle (Castello) district. 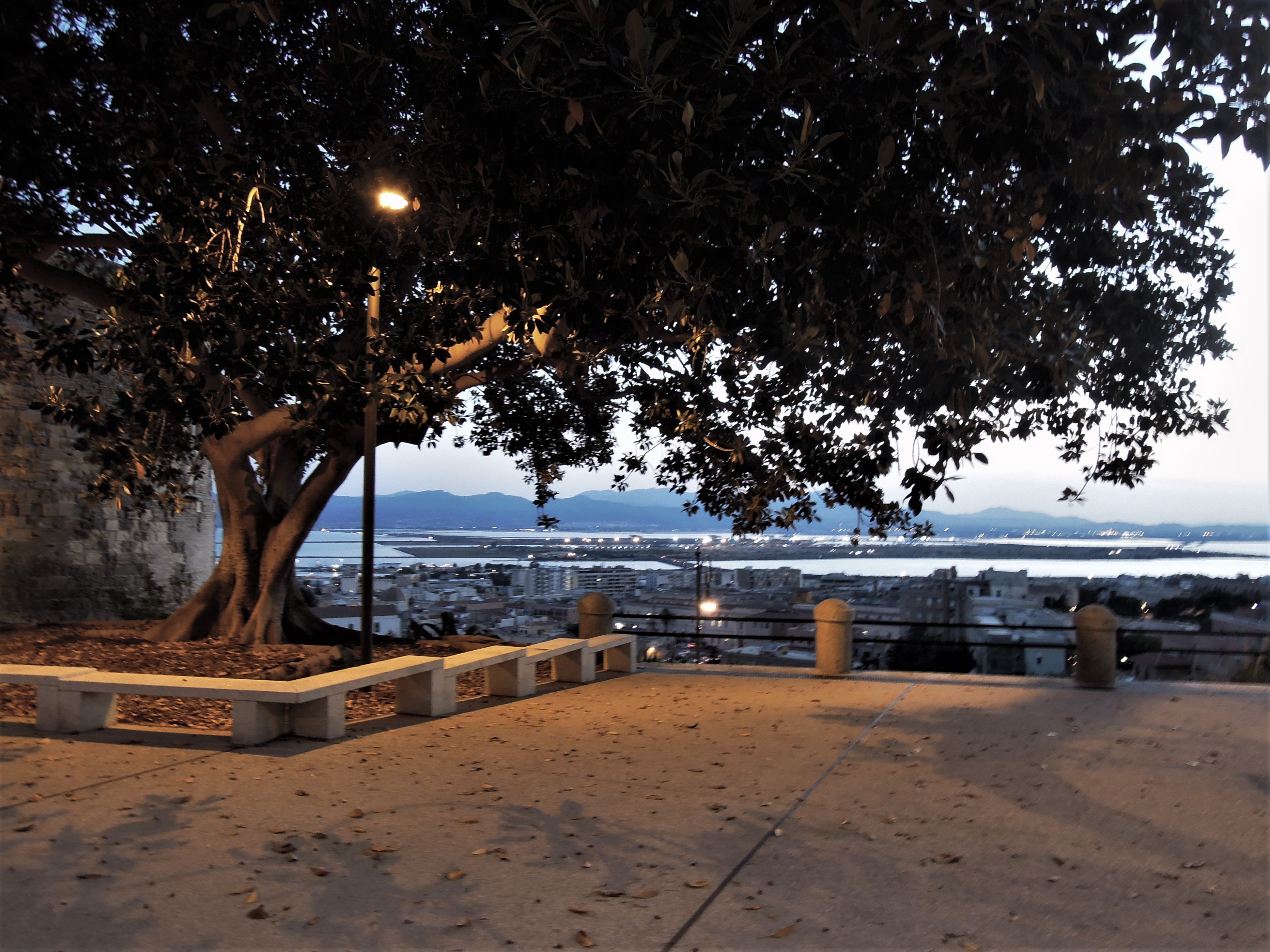 The tour was organized by Trip Sardinia agency, which organizes events, tours and tours throughout the island.
Thanks to a brilliant guide called Claudia, who started the tour at the Porta Cristina, the monumental arch that is the entrance to the Castello neighborhood.

Porta Cristina (Cristina gate), as Claudia explains, became a monumental gateway in 1854 of the Savoy during the united Sardinian-Piedmont kingdom.
Its previous name was Porta del Soccorso (Succor Door) because the castle is introduced through a tunnel excavated in the rock. 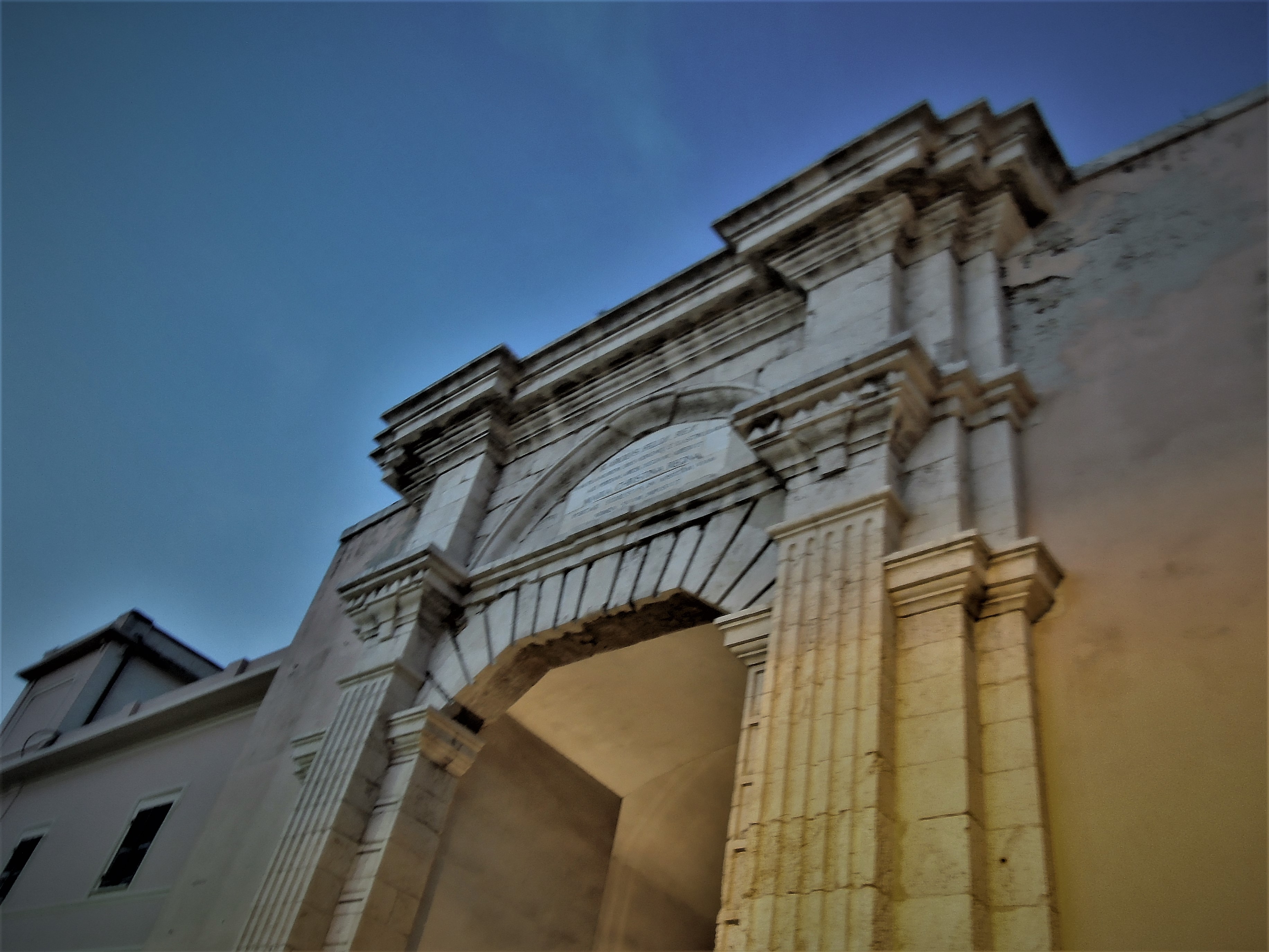 During both the Pisa and Aragonese governments, the castle had a purely military role: it was there where all the administrative, military and political operations were carried out; Its doors were opened during the day to encourage commerce and closed at a certain time of the afternoon. But the inhabitants of the city of Cagliari were not allowed to remain beyond that time. The sound of a horn called for all the citizens to leave before the closing of the doors happened, and the unlucky ones who had the misfortune to remain inside the castle, were literally thrown from the walls the fortress.

There is an expression in Cagliari, jargon that is used nowadays in an ironic sense, and that has its origin in this custom: “ci anti bogau a sonu e corru” (if the horn sound, run).

After passing Porta Cristina, we stop below the Tower of San Pancratius. The tower, from Pisa origin also , is to its twin tower of the elephant that is just ahead. A third tower is in the place and it has been incorporated in a historical and noble building of Cagliari, called Palazzo Boyl. 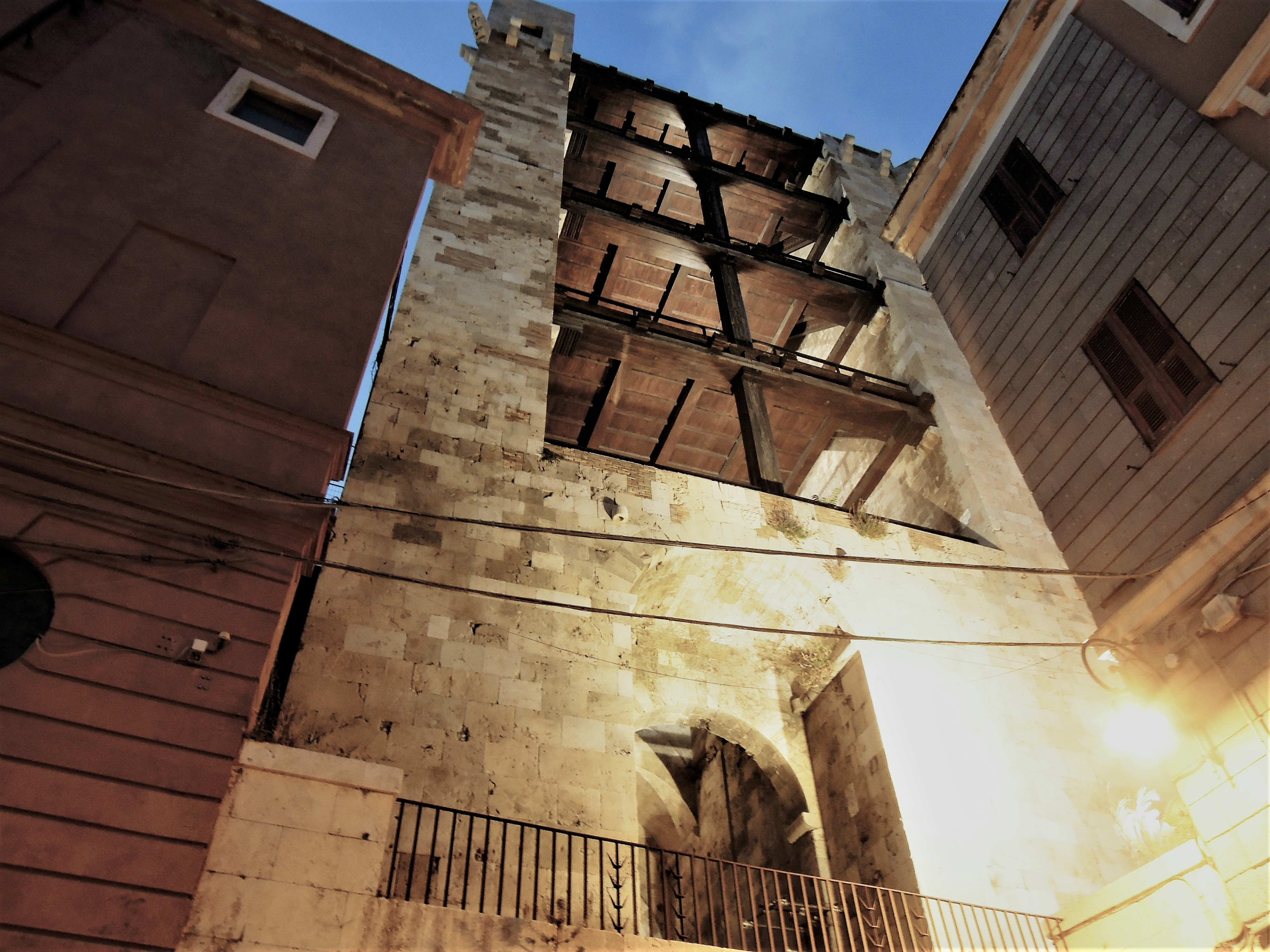 The tower of San Pancrazio is 36 meters high and is the highest point from where you can see all the city of Cagliari, with a 360 ° view.

Of course, you can climb up, but the advice is not to do if you suffer from vertigo. The stairs are very safe but are “open” construction, and could create some problems for those who suffer a little with height.
The stairs were built specifically with Pisani wood always with a defense purpose: if the enemy managed to conquer the tower, the Pisans set fire to the wood to make the structures give way and trap the enemy in a trap.
During the early 900’s the tower was also used as a prison. Below is the website where you can find all the information to visit the tower and nearby monuments.

We continue the journey towards the heart of the neighborhood, many anecdotes are linked to the streets and small squares. The square dedicated to Mafalda of Savoy, the second daughter of King Vittorio Emanuele III, whose life ended tragically in 1944 and died in the concentration camp of Buchenwald, almost opposite the Tower of San Pancracio.
The facade of the building that houses the square, contains a writing erased by the time that goes back to the time of fascism: there are few words that are still perceived, however, remains an unmistakably clear, and shows only the name of Mussolini. 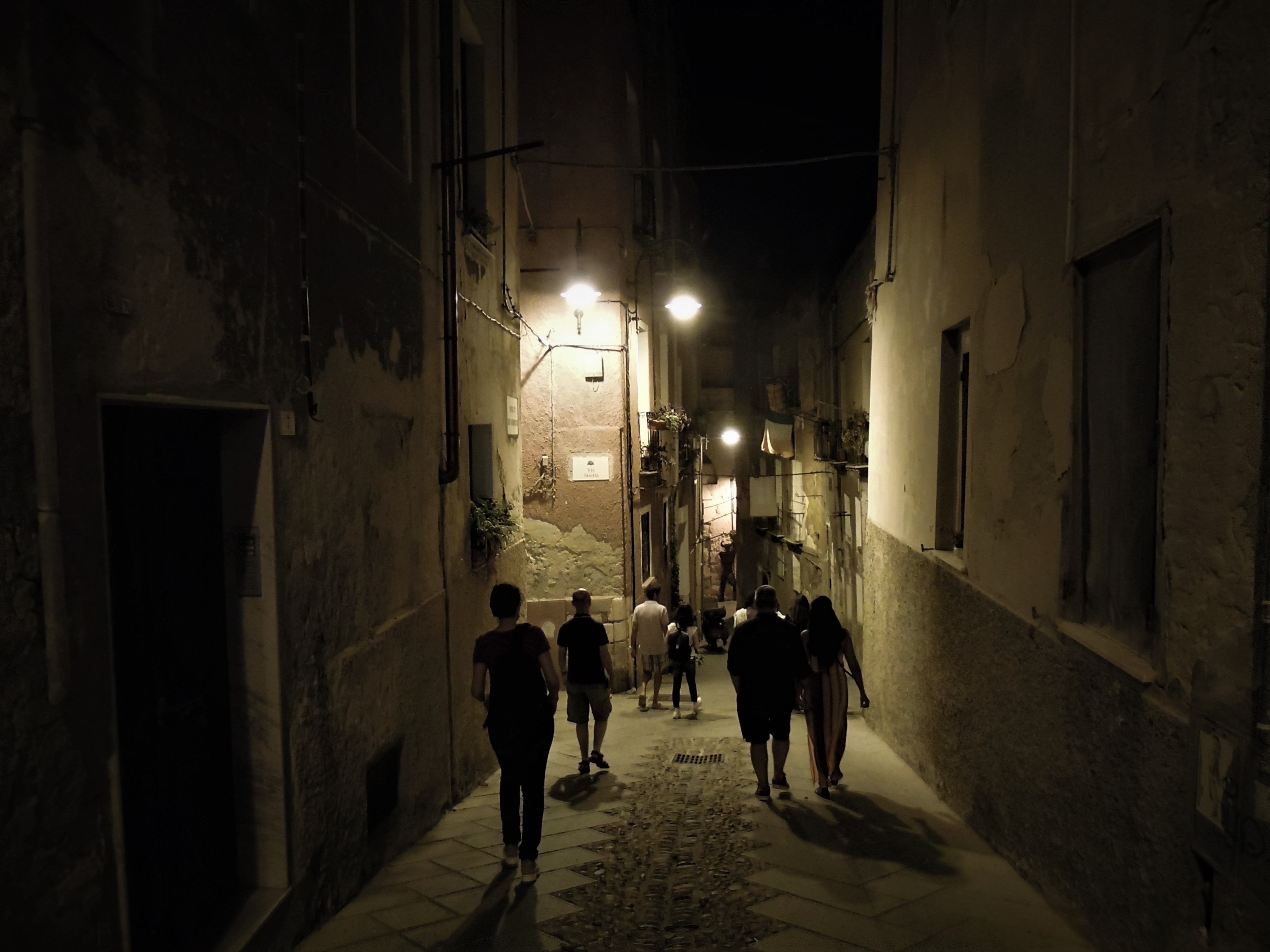 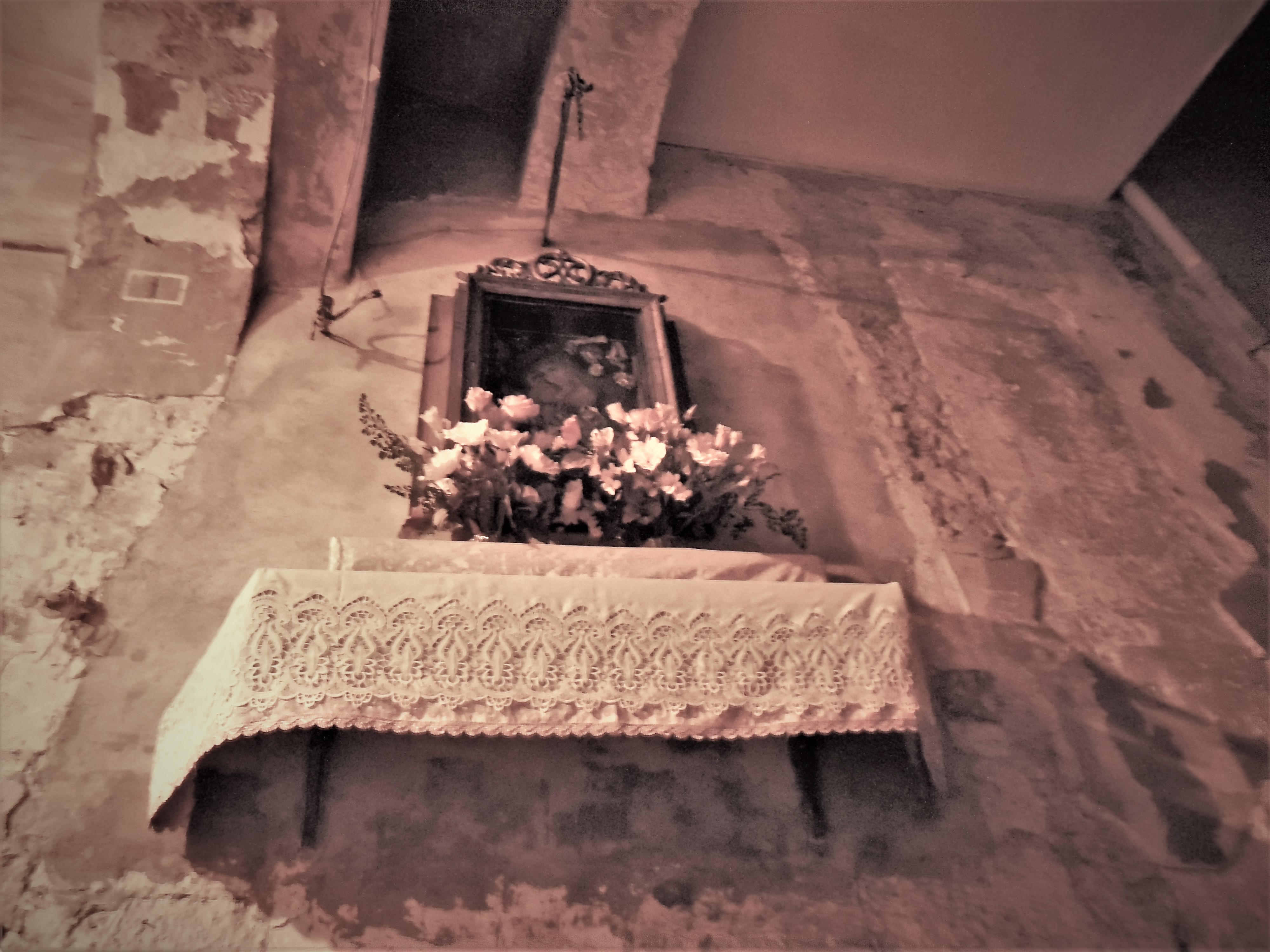 From the square we passed Via Pietro Martini. The street is named after the historic city of Cagliari, it is the seat of the building in which it lived and died. There is a curious anecdote about Pietro Martini: his death, his body was petrified by Efisio Marini, the bizarre scientist who invented a completely personal mummification technique, a technique that did not cause cuts and incisions or alter the natural color of the living body. Of course Efisio Marini, took the secret with him to the grave and did not reveal to anyone the technique that he himself had invented. 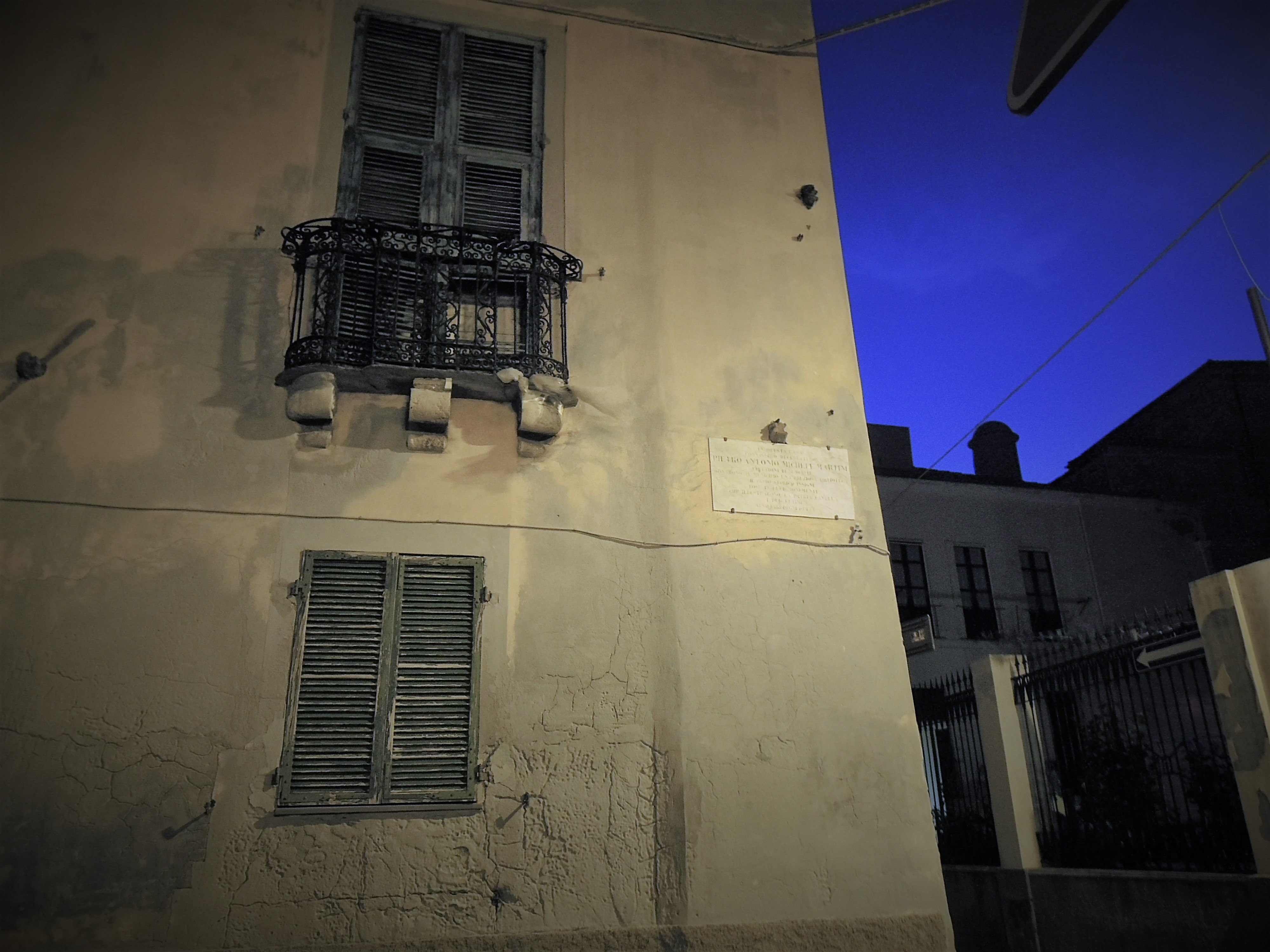 As seen in Cagliari was not frowned upon, and the technique was much appreciated in Europe and other cities in Italy, such as Naples, where his works are preserved in the Anatomical Museum of the city. In addition to the historic Martini, other celebrities were the object of the “care” of the petrifying surgeon; Another famous personage was Giuseppe Garibaldi, who still had life, had the privilege of receiving a medallion that kept his blood that Efisio Marini had kept and petrified when Garibaldi was wounded in Aspromonte. I dare not imagine his face when he received the singular honor … 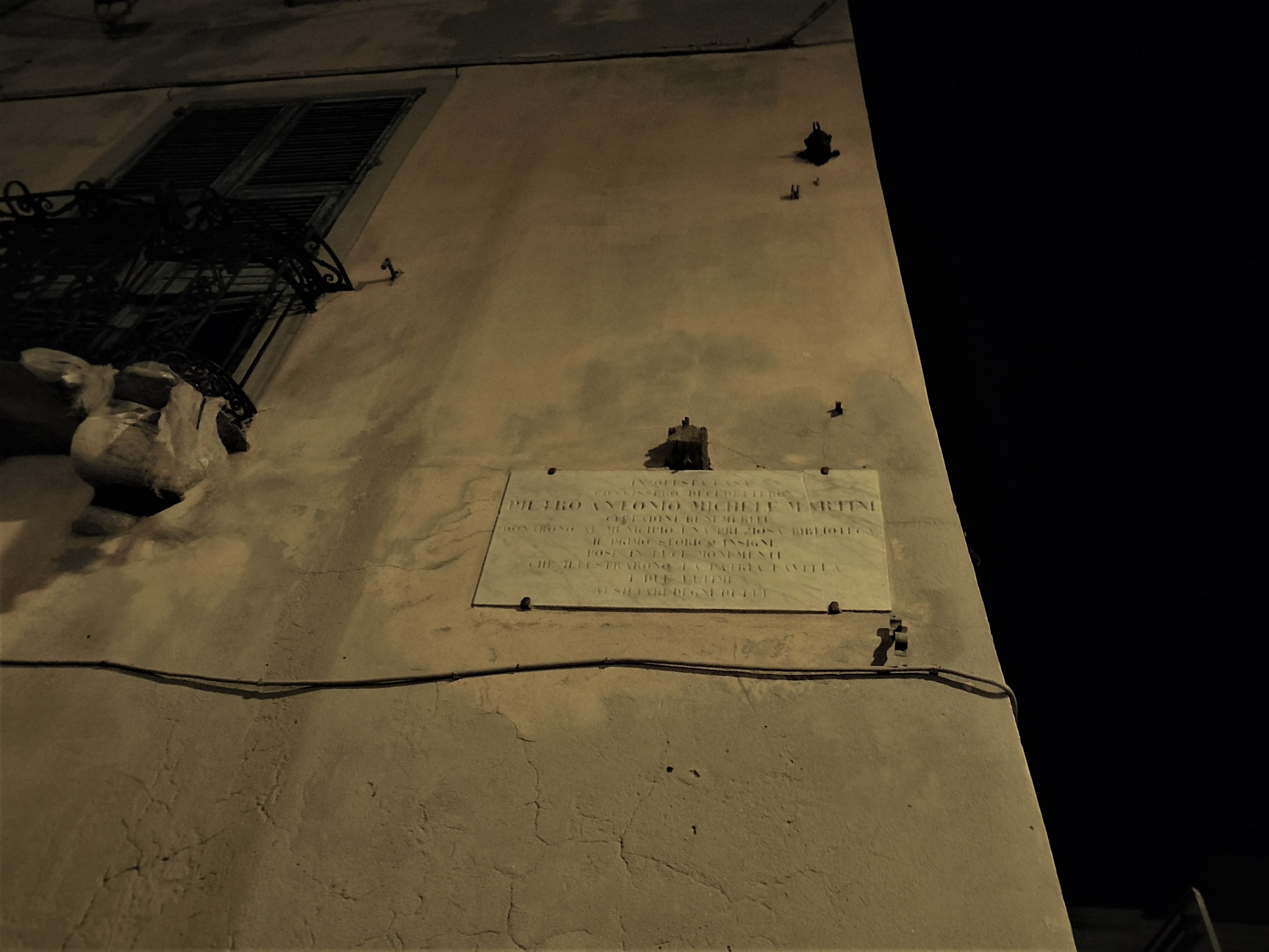 Leaving Martini Street, with the group and the guide we arrive at Piazza Palazzo. For a time it was called Piazza Mayor to distinguish it from la piazzeta (small square), the present Piazza Carlo Alberto, where the nobles condemned to death were executed. 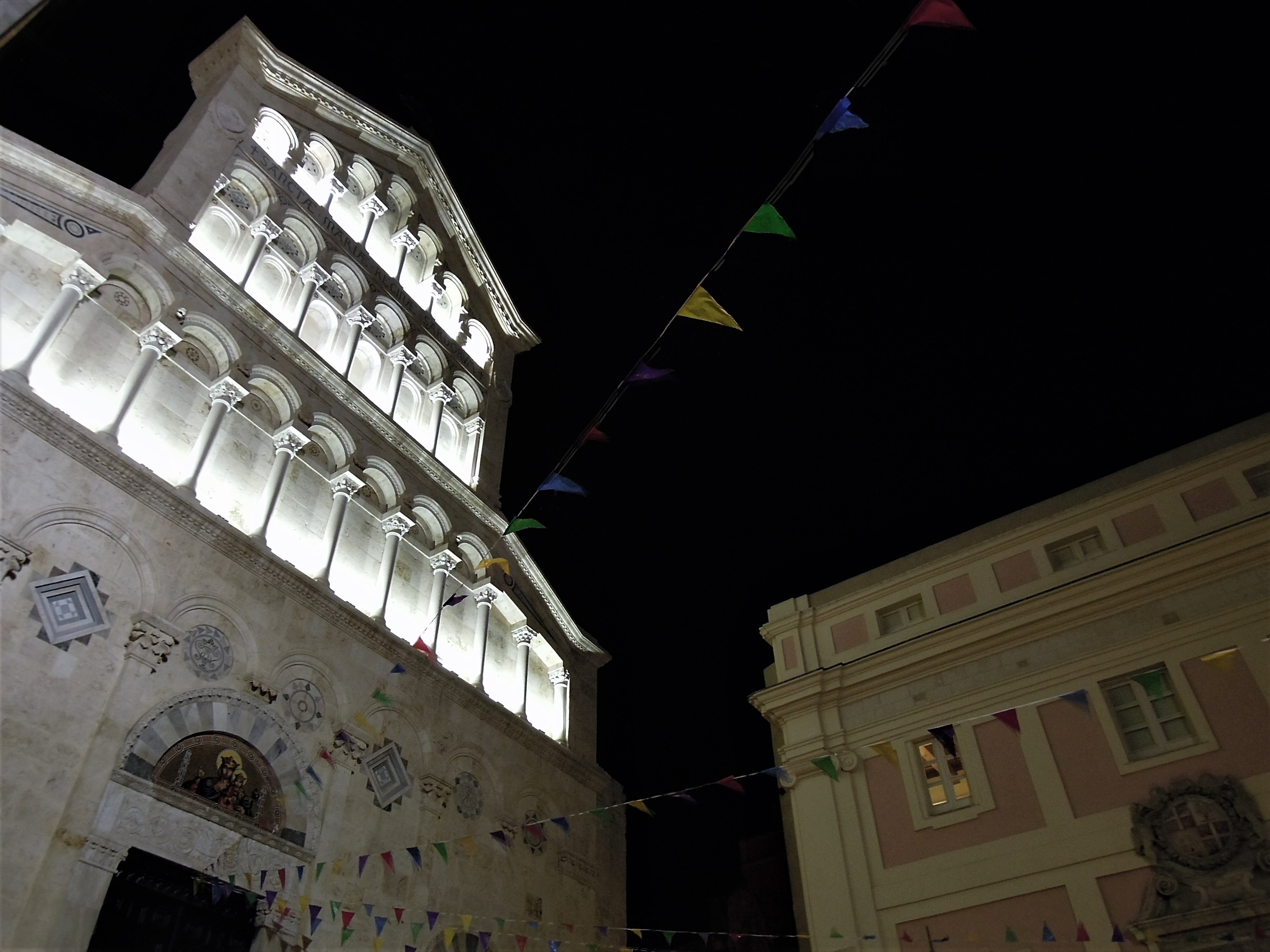 Our tour continues towards Via Santa Croce, where the church of the same name is found, until reaching the Elephant Tower.
As I mentioned before, the elephant is the twin tower of the Tower of St. Pancratius. Both were designed by Giovanni Capula and were built with limestone from Bonaria hill.
The strong walls were built by the Pisans to fortify the city since an imminent attack of Aragon was expected; Predictable because Regnum Sardiniae at the beginning of the 300 was granted to Giacomo II king of Aragon, reason why an an attack, would not have taken long in occurring. 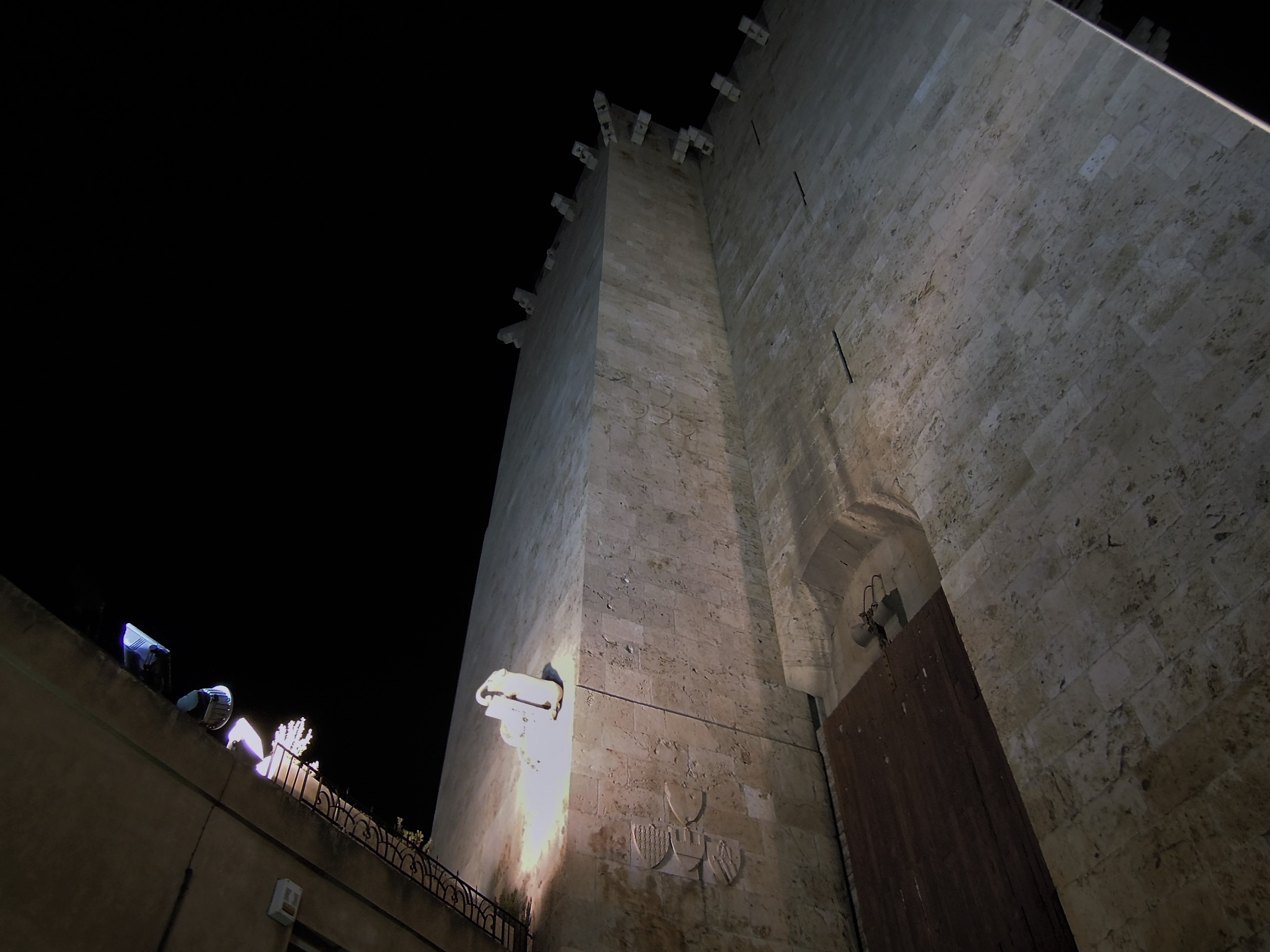 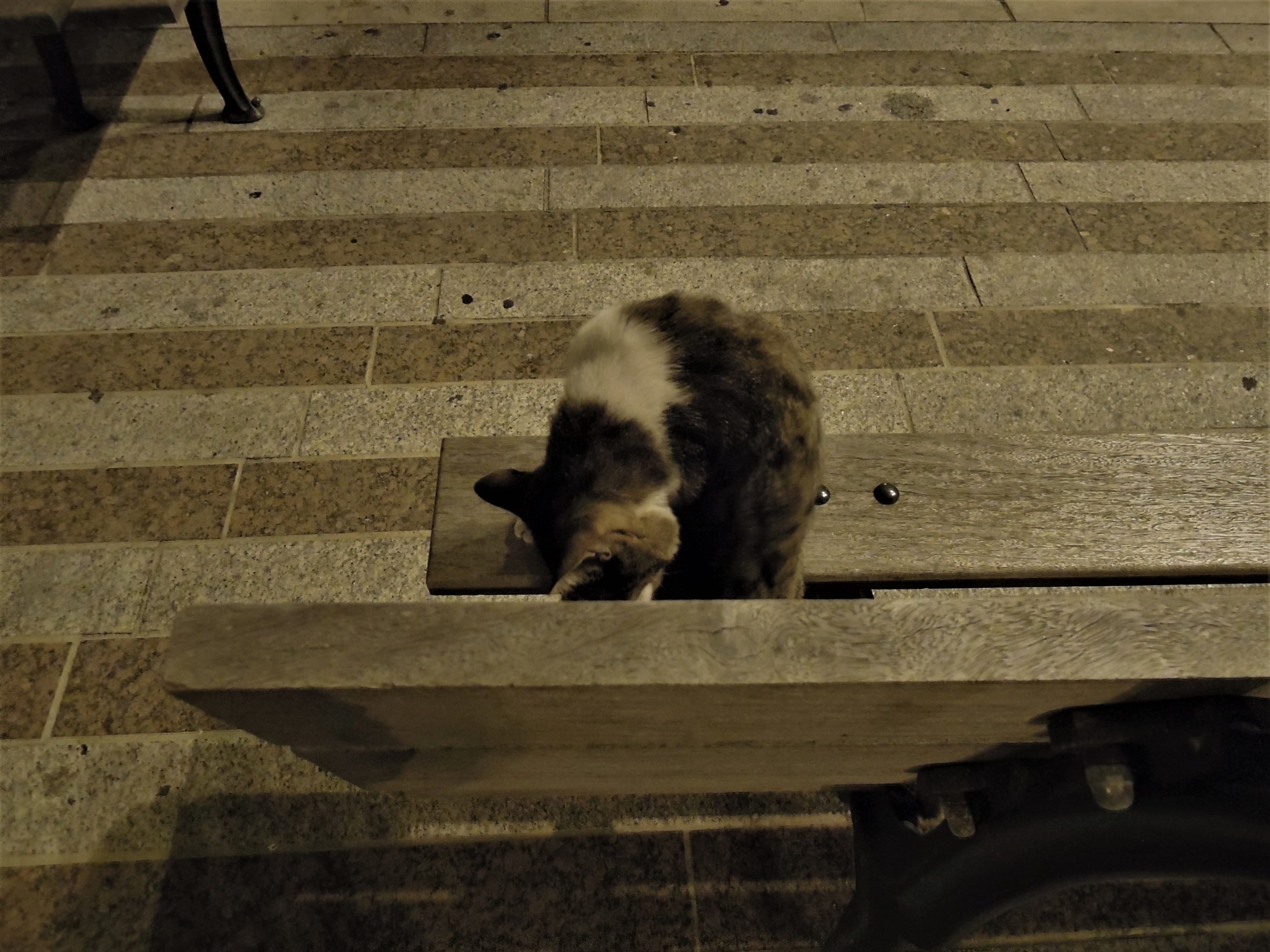 From the Elephant Tower we descended through the University and entering the last stage of our night tour. 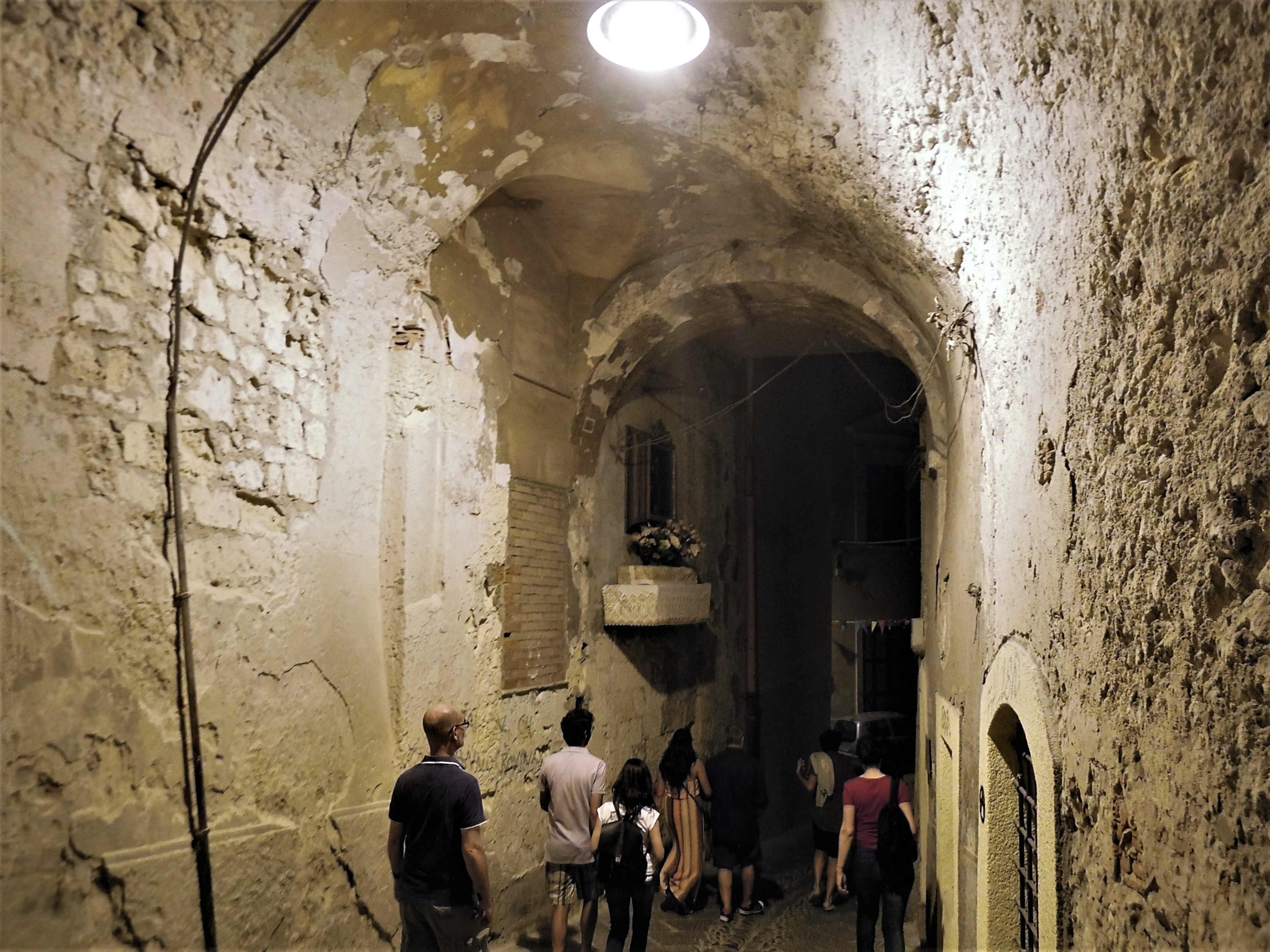 We stopped in front of Palazzo Boyl (Boyl palace), the old building built by the noble Carlo Pilo Boyl (Marquis who also designed the Porta Cristina), a descendant of Filippo Pilo Boyl who in 1300 helped the Aragonese to defeat the Pisans and conquer the city.
The neoclassical style of the palace offers a view of the beautiful four statues representing the four seasons and the noble emblem, unmistakably Aragonese, with red sticks on a gold background.
In Palazzo Boyl, one realizes that the other defensive tower, also designed by the architect Giovanni Capula, is built in the building: The Lion Tower.

Of the three, it was the tower that suffered most damage: by the English attack on the 1700, followed by the French and Spanish attack; Reduced almost in ruins, and is finally incorporated inside the building so that it does not collapse. 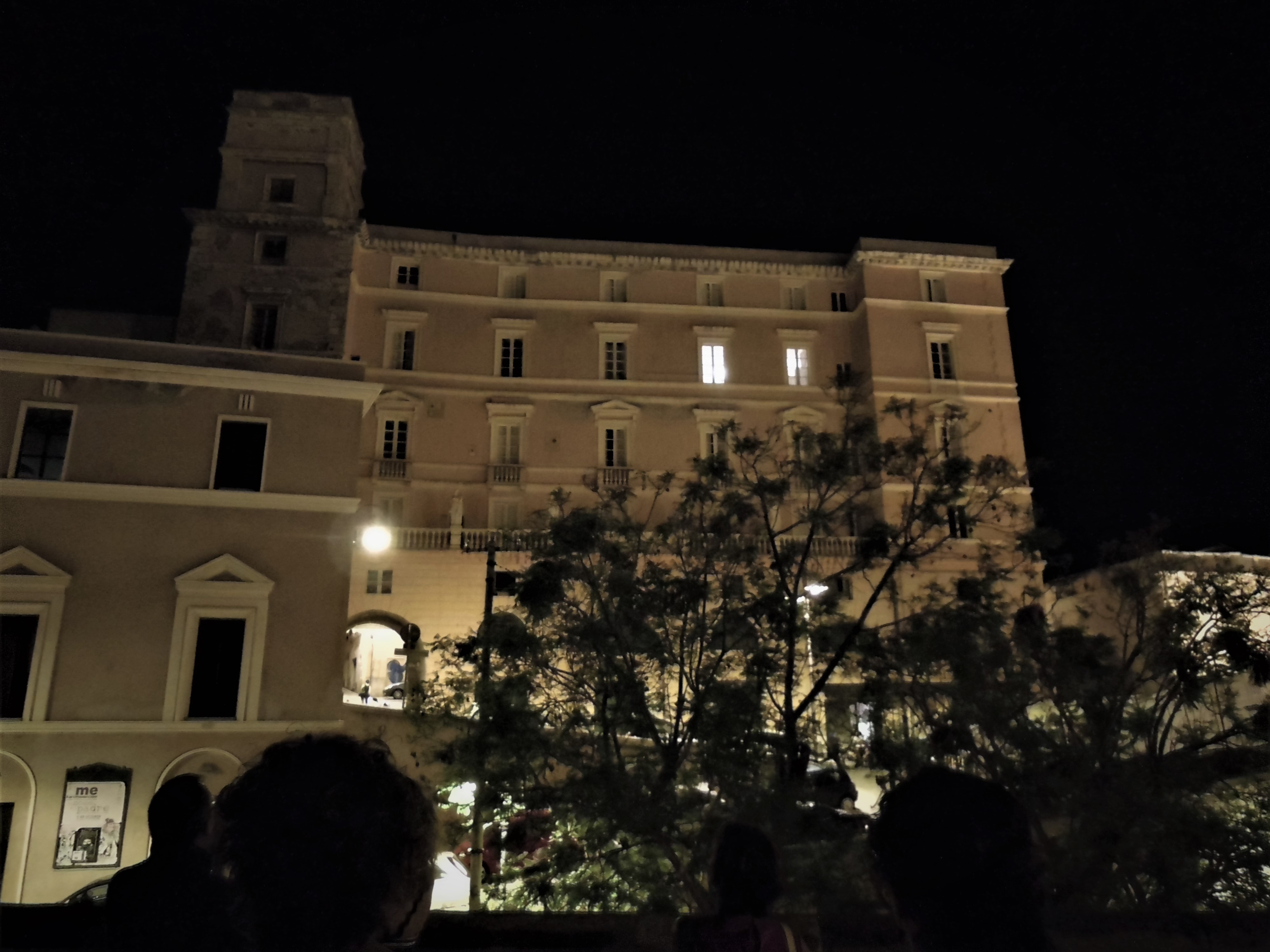 As I said at the beginning of the post, the city itself has the impression of knowing a lot and yet there are so many things that I still do not know; Cagliari, being a coastal city, has been object during centuries of foreign domination and diverse cultural influences.

This is why I am grateful to have had the opportunity to do this tour and find these young and passionate people who not only have been able to describe, but also tell, Cagliari. 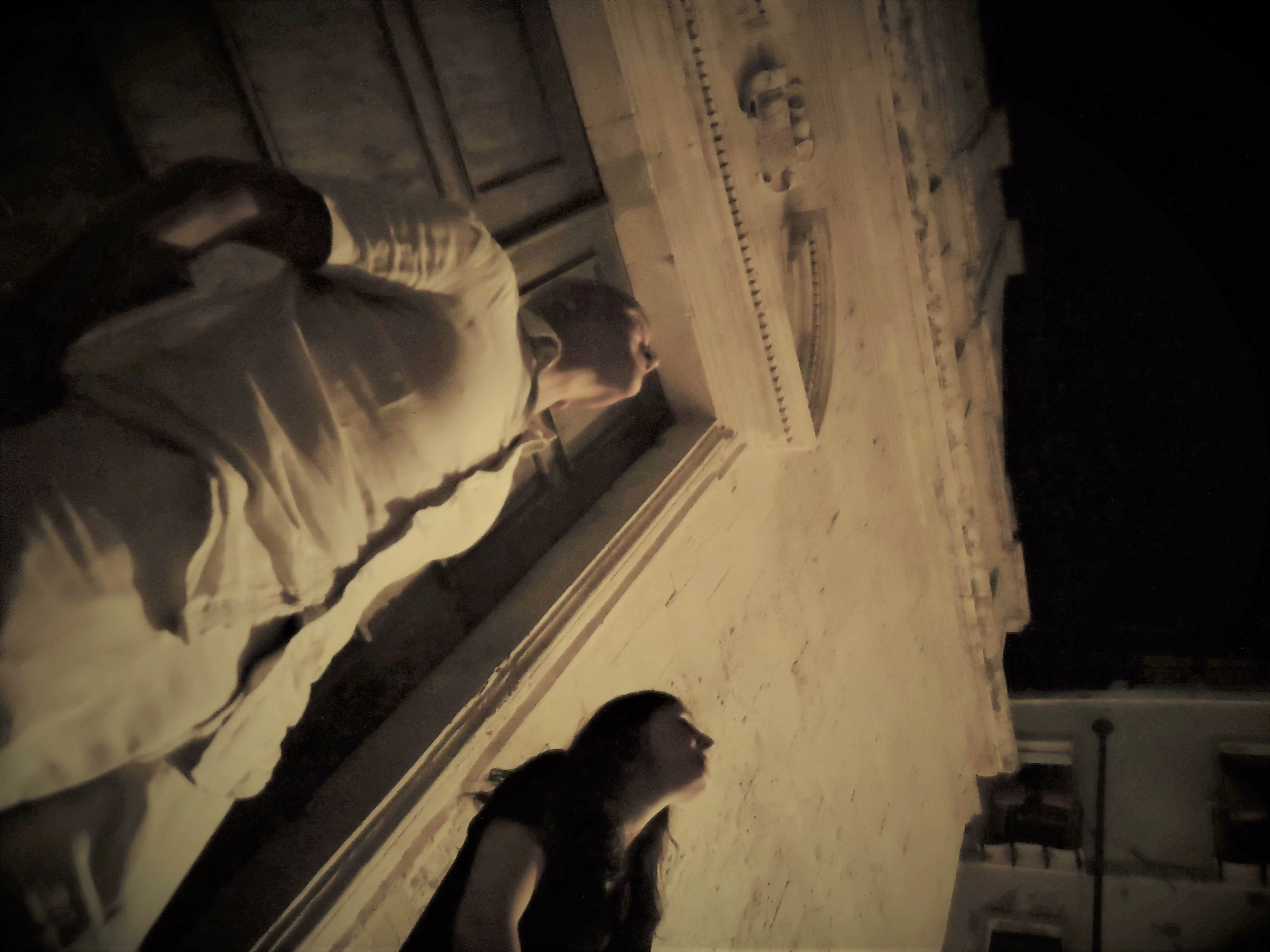 For sure we will count again with the guys from Trip Sardinia. In the meantime, I invite you to visit their website to get other interesting ideas if you want to know more about Sardinia from an original and certainly fascinating point of view: http://www.tripsardinia.it/

PS: I checked and their guides speak Spanish and English … you can not ask for more …! 😉 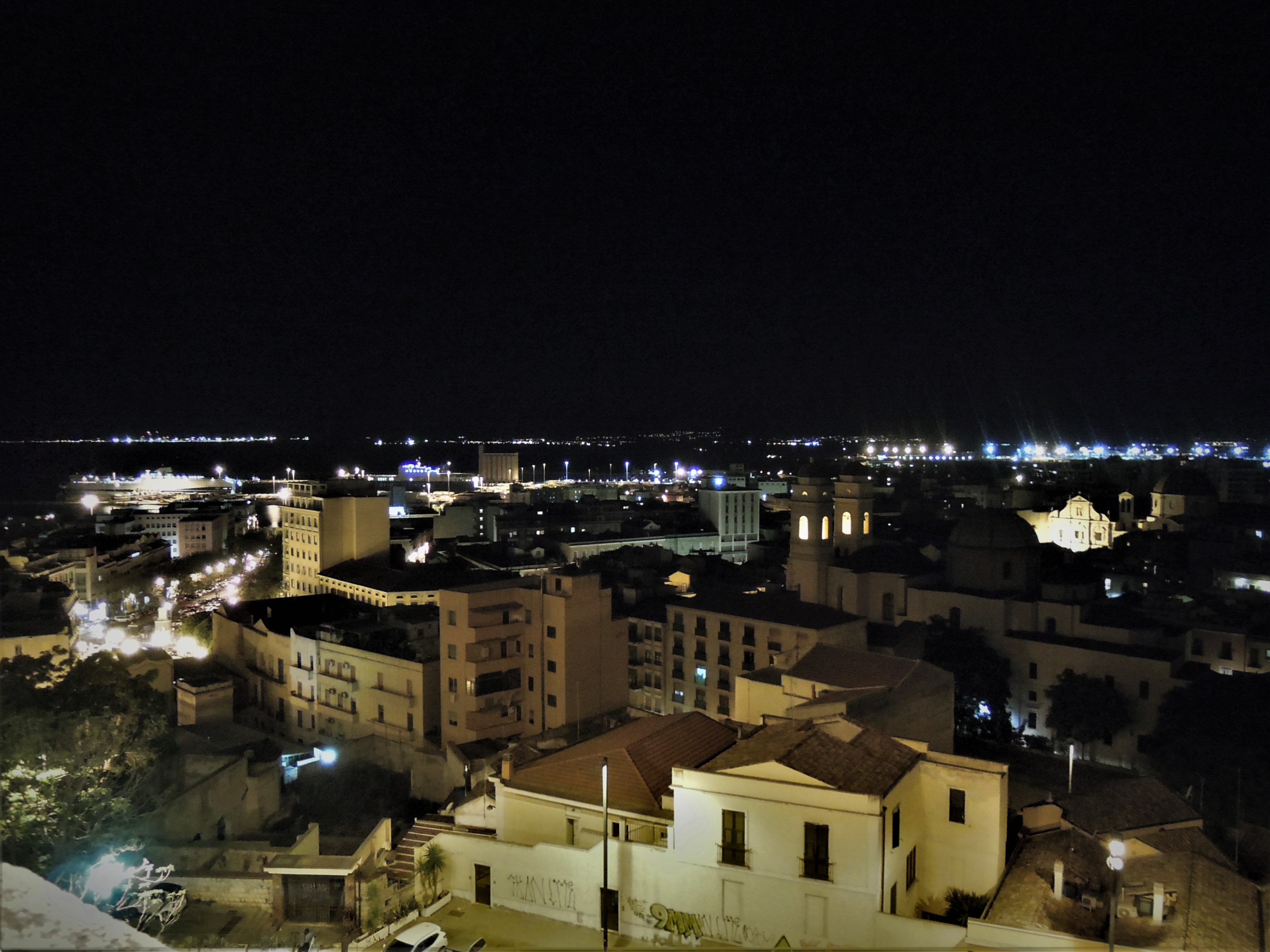